An app for young beginner French learners that encourages engagement through listening, reading and drawing 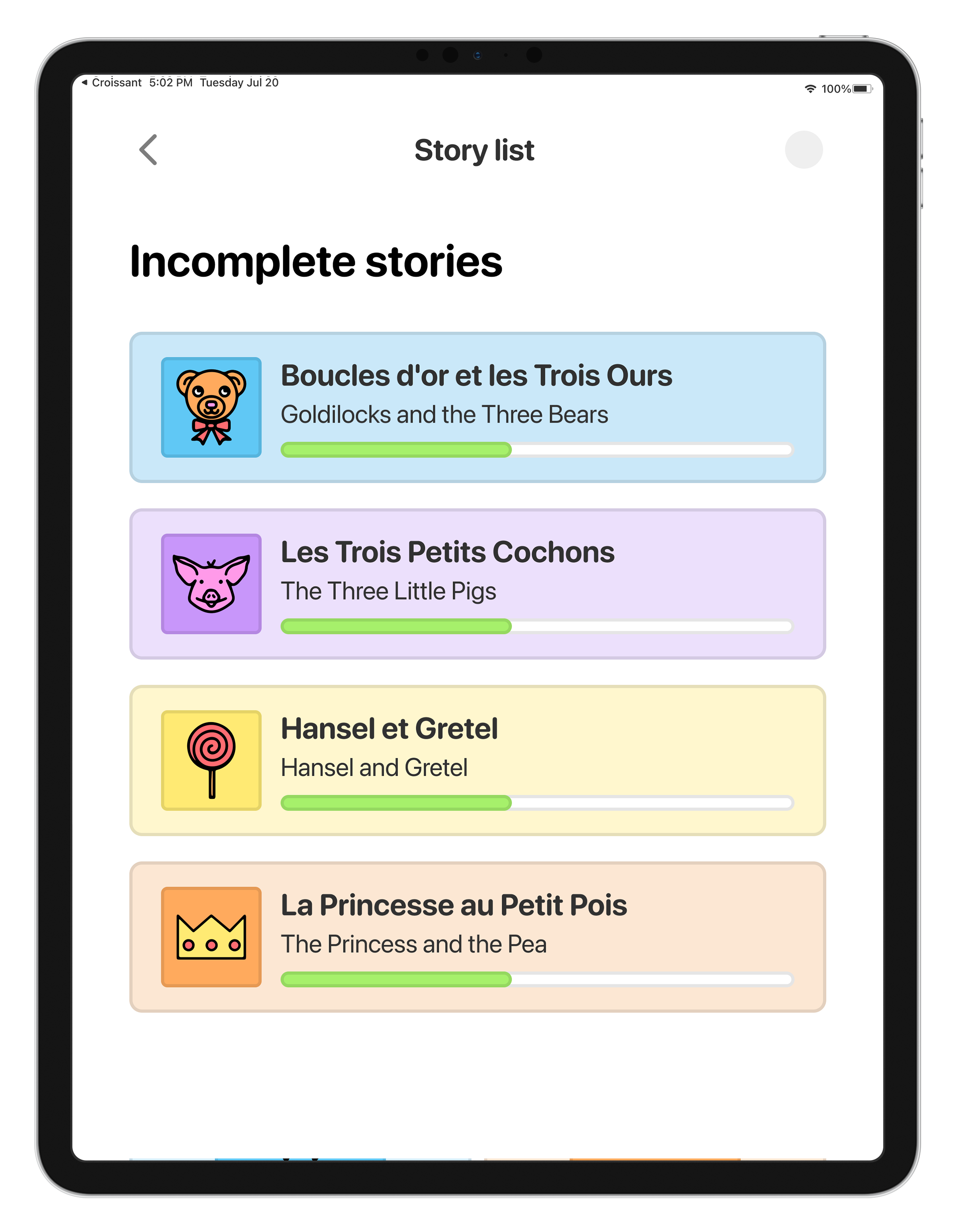 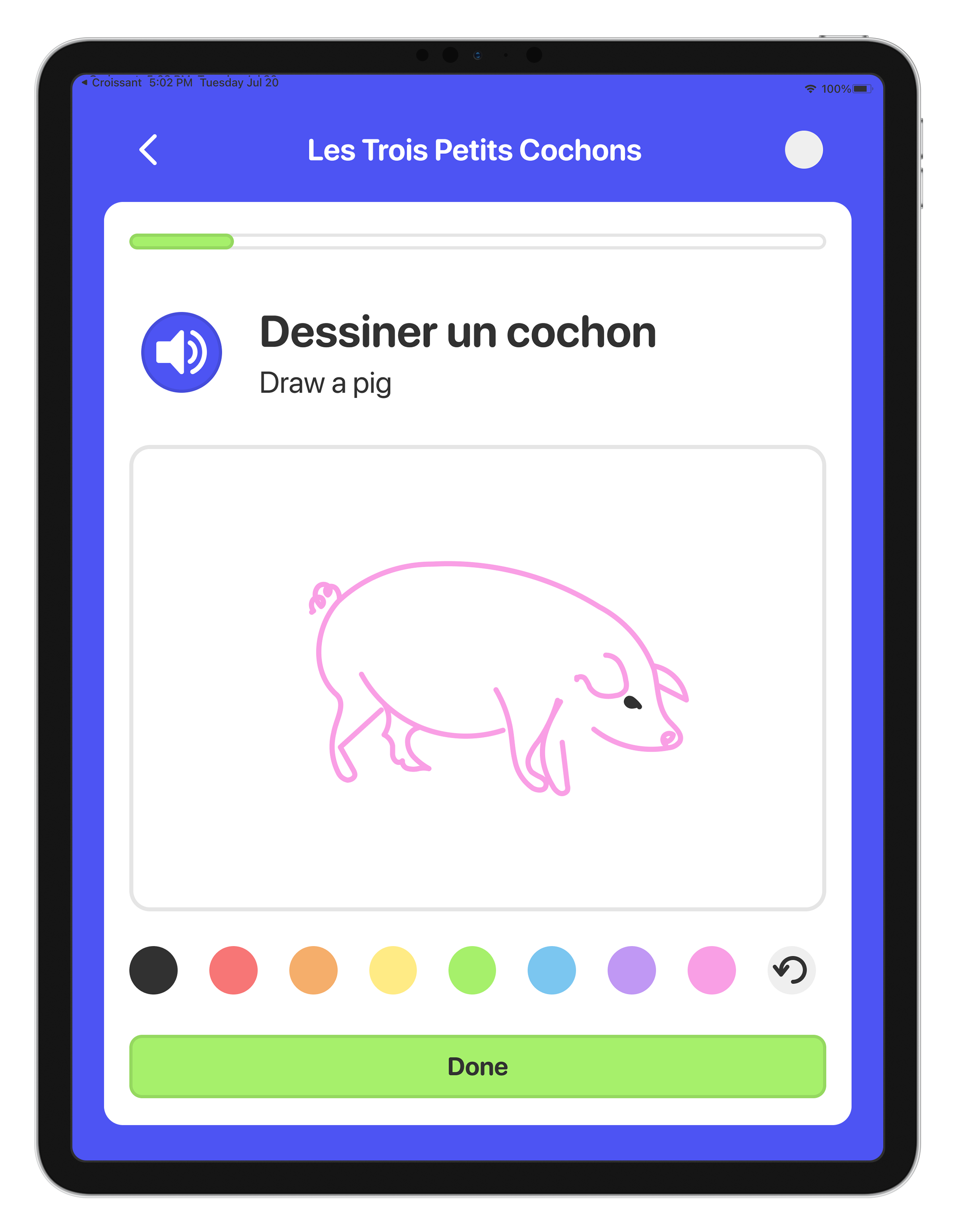 How might we help young, english-speaking people to learn french in a way that integrates into daily life and is mentally engaging

An app that teaches language through interactive story creation and encourages engagement through listening, reading and drawing.

How will the user engage with a new language?

To better understand our users wants and needs, we conducted a literature review as well as two rounds of prototyping to test out different ways to get children to engage with short stories in french.

"Drawing forces the person to process information in multiple ways: visually, kinesthetically, and semantically. It requires elaboration on the meaning of the term and translating the definition to a new form (a picture)"

How does this translate physically?

To clarify how the user would move through the different lessons and phases in the app, we made paper components to structure the UX before designing. 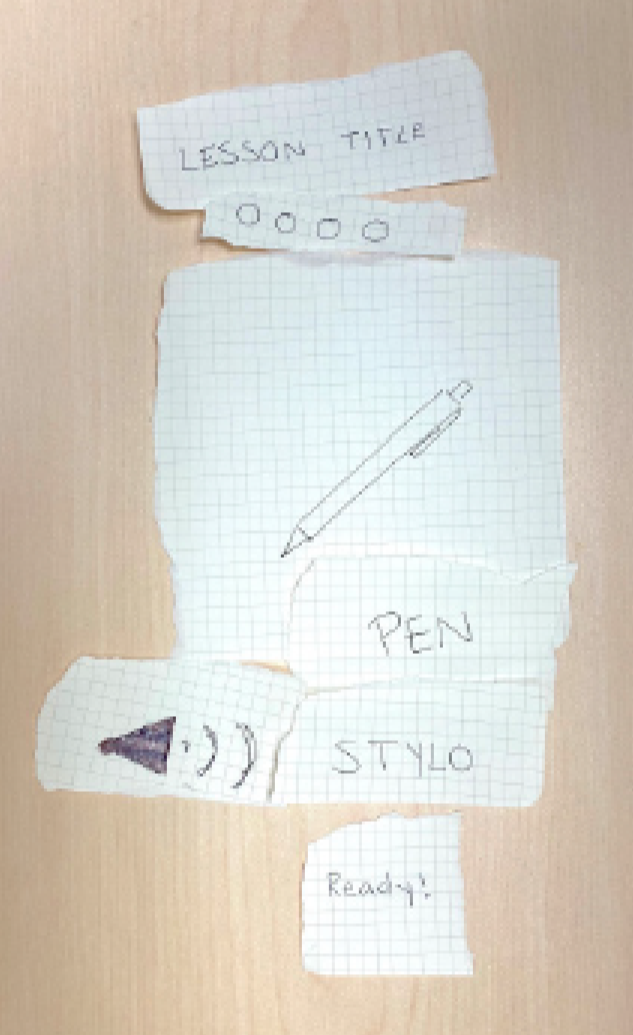 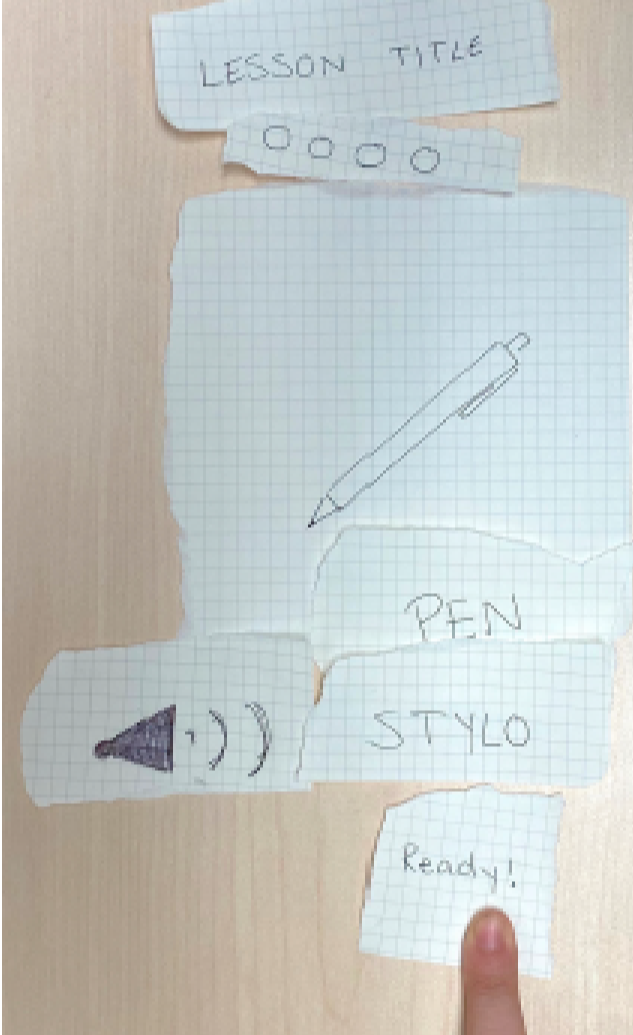 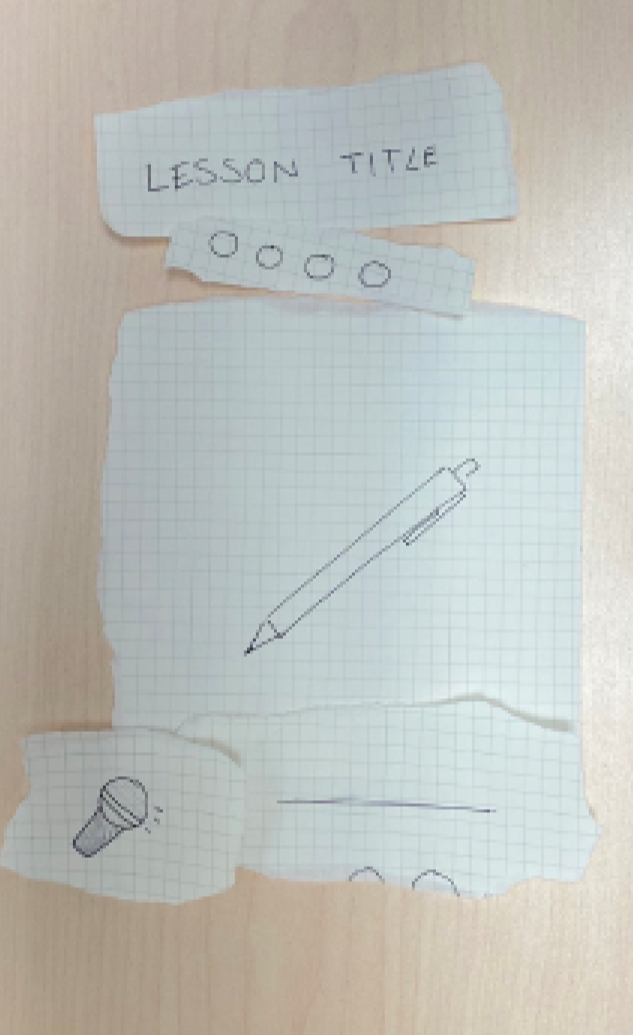 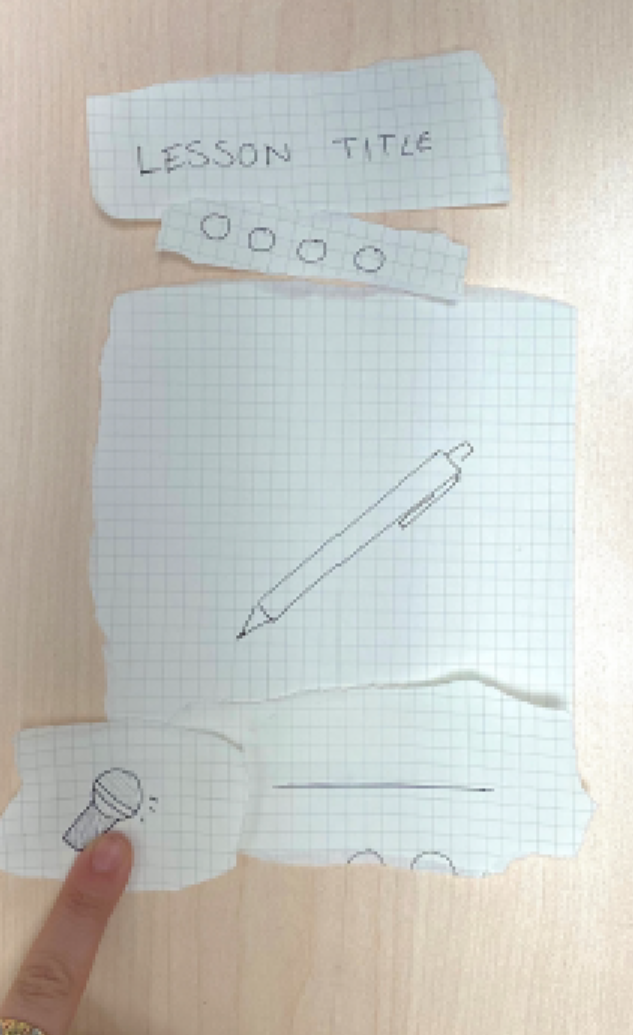 We fabricated a tactile solution as well which included a single story and story blocks to place in the right spots. We moved away from this direction as there would have to be multiple story blocks, which took up too much physical space and did not integrate smoothly into parents/children’s daily lives. 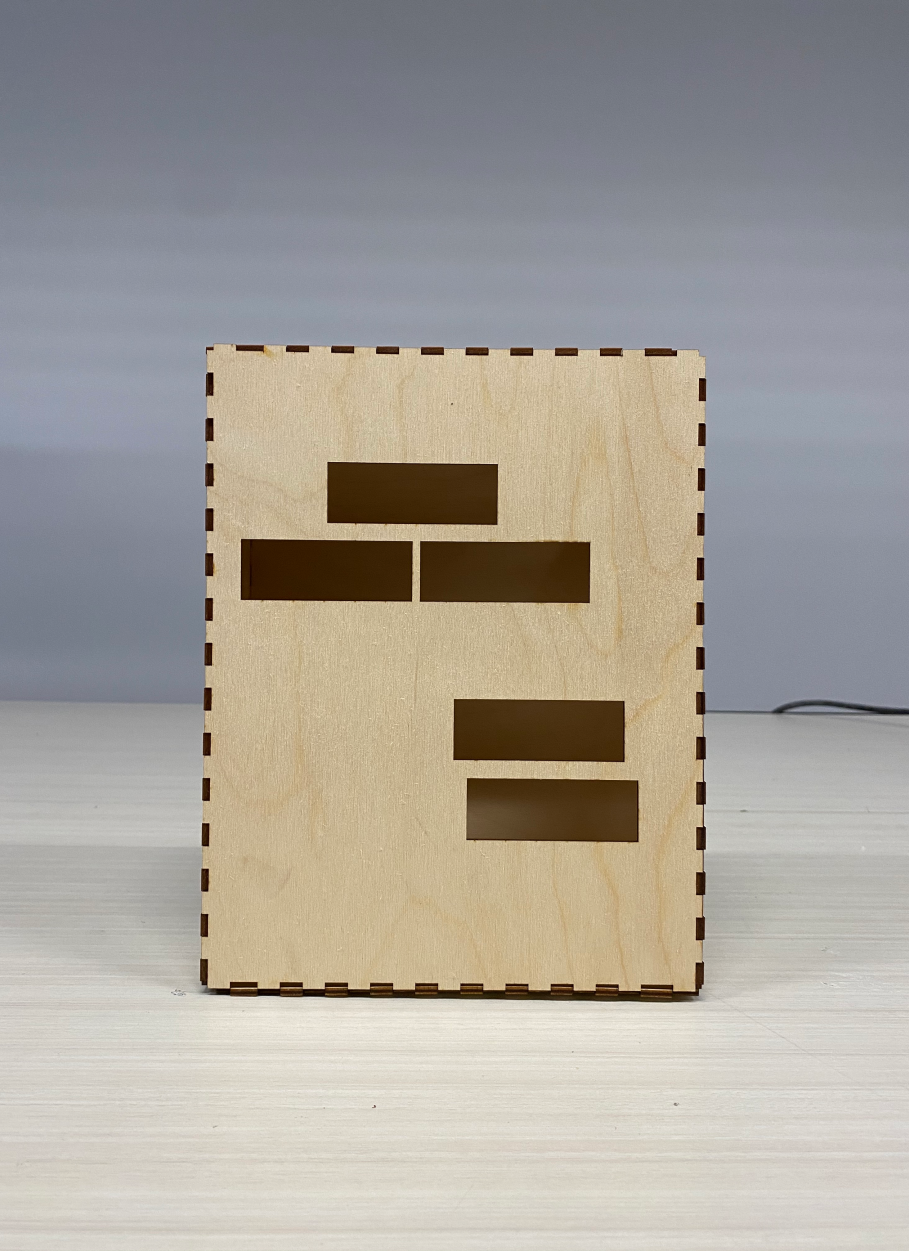 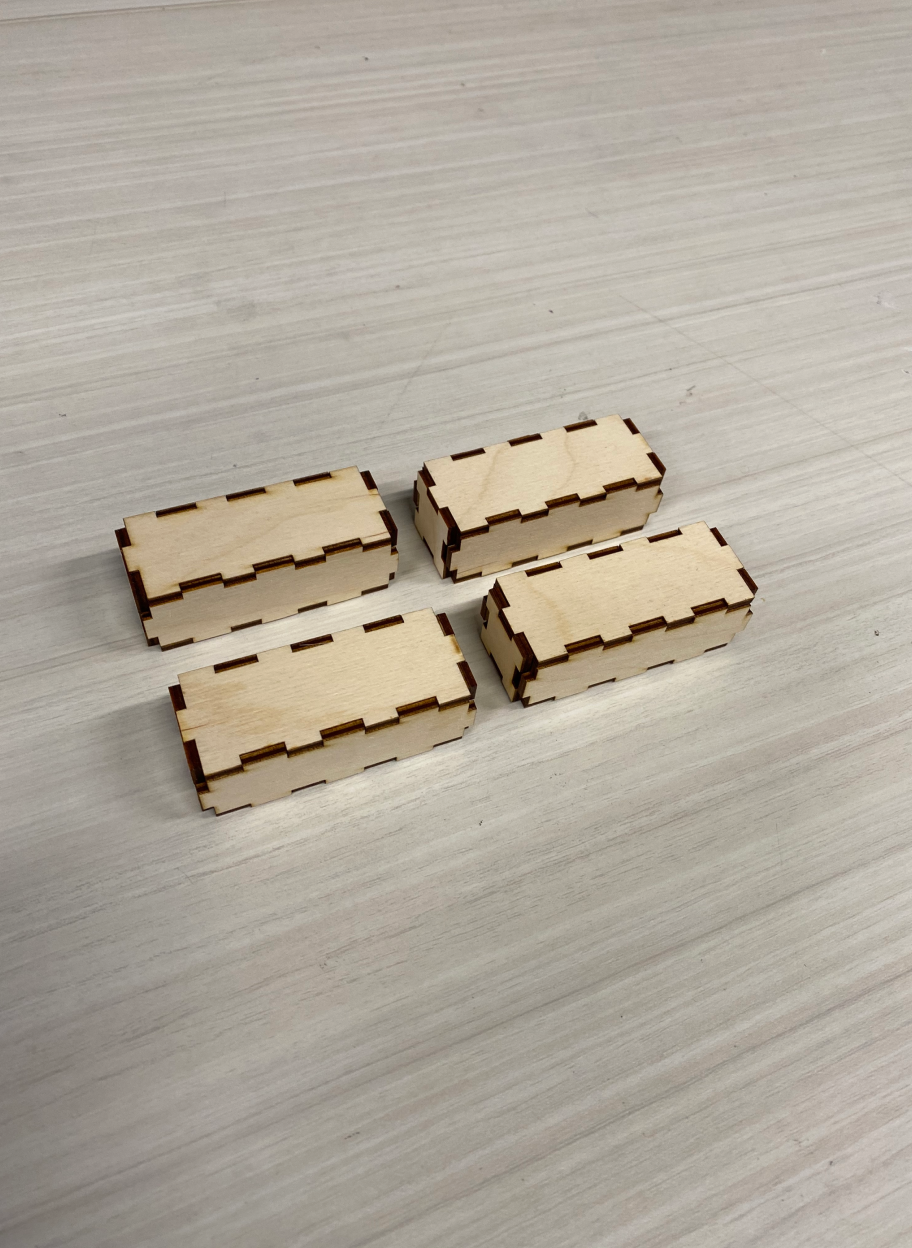 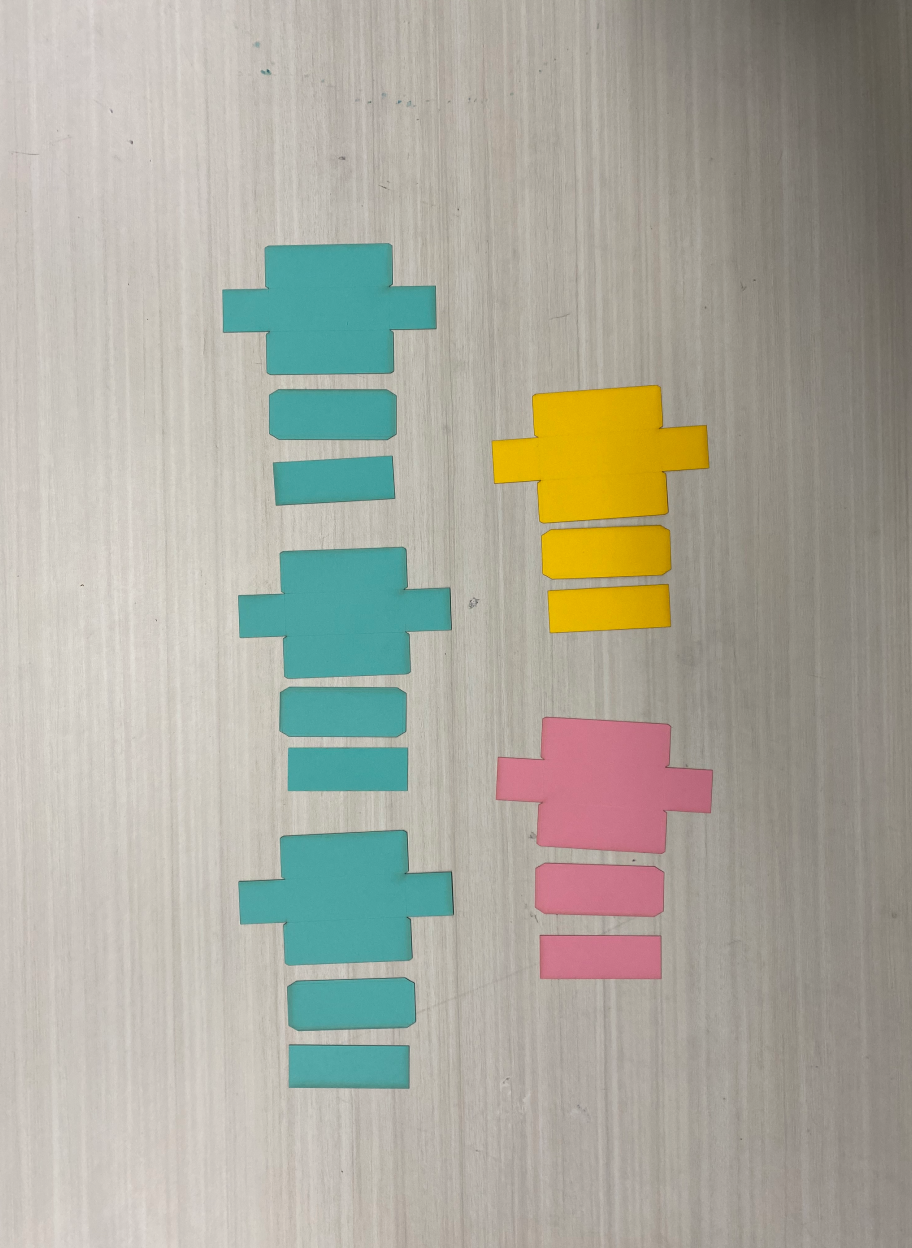 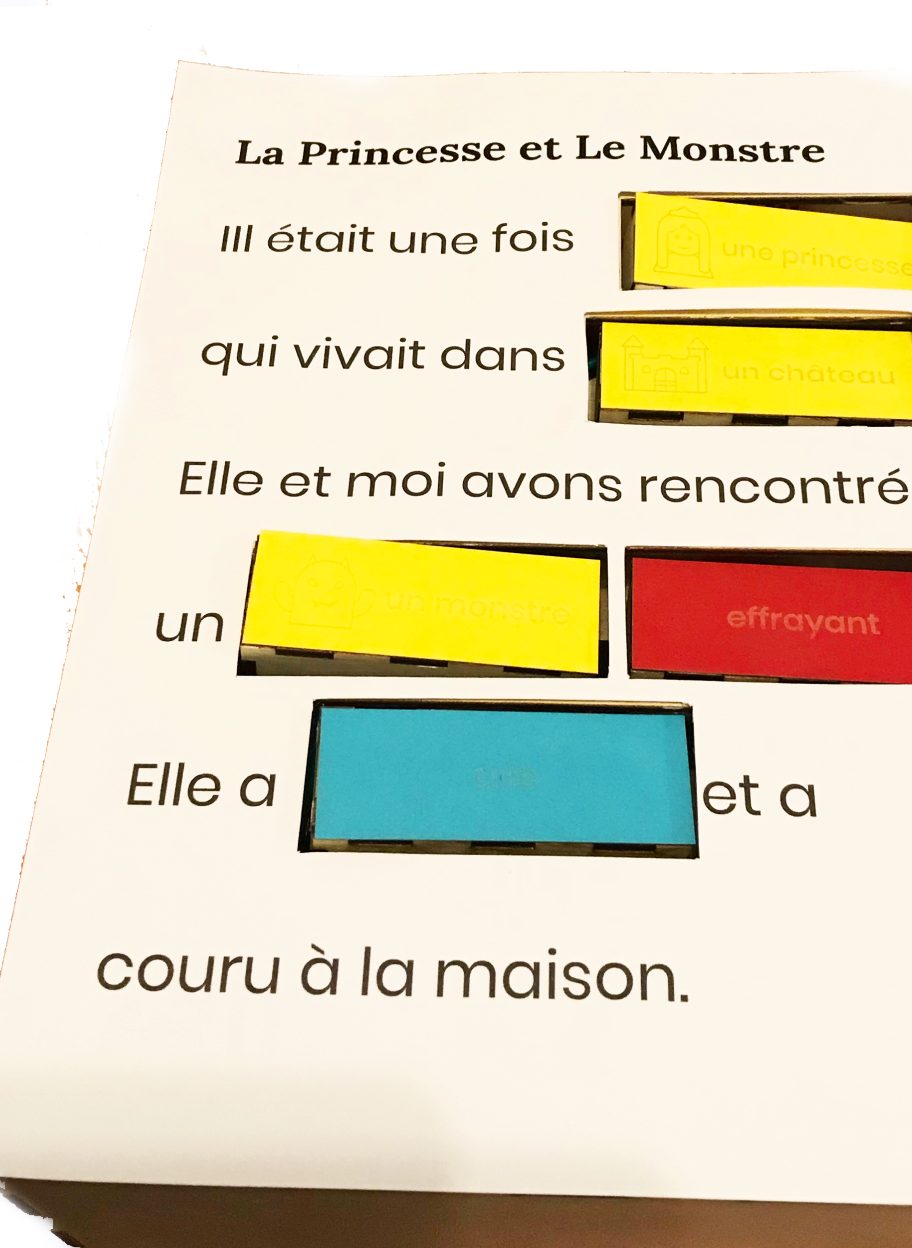 We moved toward a digital solution as the two rounds of prototyping proved that a more tactile solution would not integrate as smoothly into users daily lives.

Users will engage with the application through listening, reading and drawing. Users will draw images that relate to the french story being read to them. The drawing encourages physical engagement and connects them to the content through different sensory stimulation.

Narrowing down the solution

We created a web of concepts to help determine the exact direction the solution would move in. Creating a visual web to attach different attributes of the solution helped us come to the conclusion that the solution would be an interactive iPad app that encouraged reading, hearing and drawing.

Getting to understand users in a to-the-point way

Rather than creating an empathy map, a Jobs-To-Be-Done framework was completed to better understand the situation from both parental and child’s sides.

Through the child’s eyes

A user journey was created based off information from the Jobs-to-be-Done and Web of Concepts were determined. This clarified what the solution was and it included all the steps of the interaction the user would have with the solution. 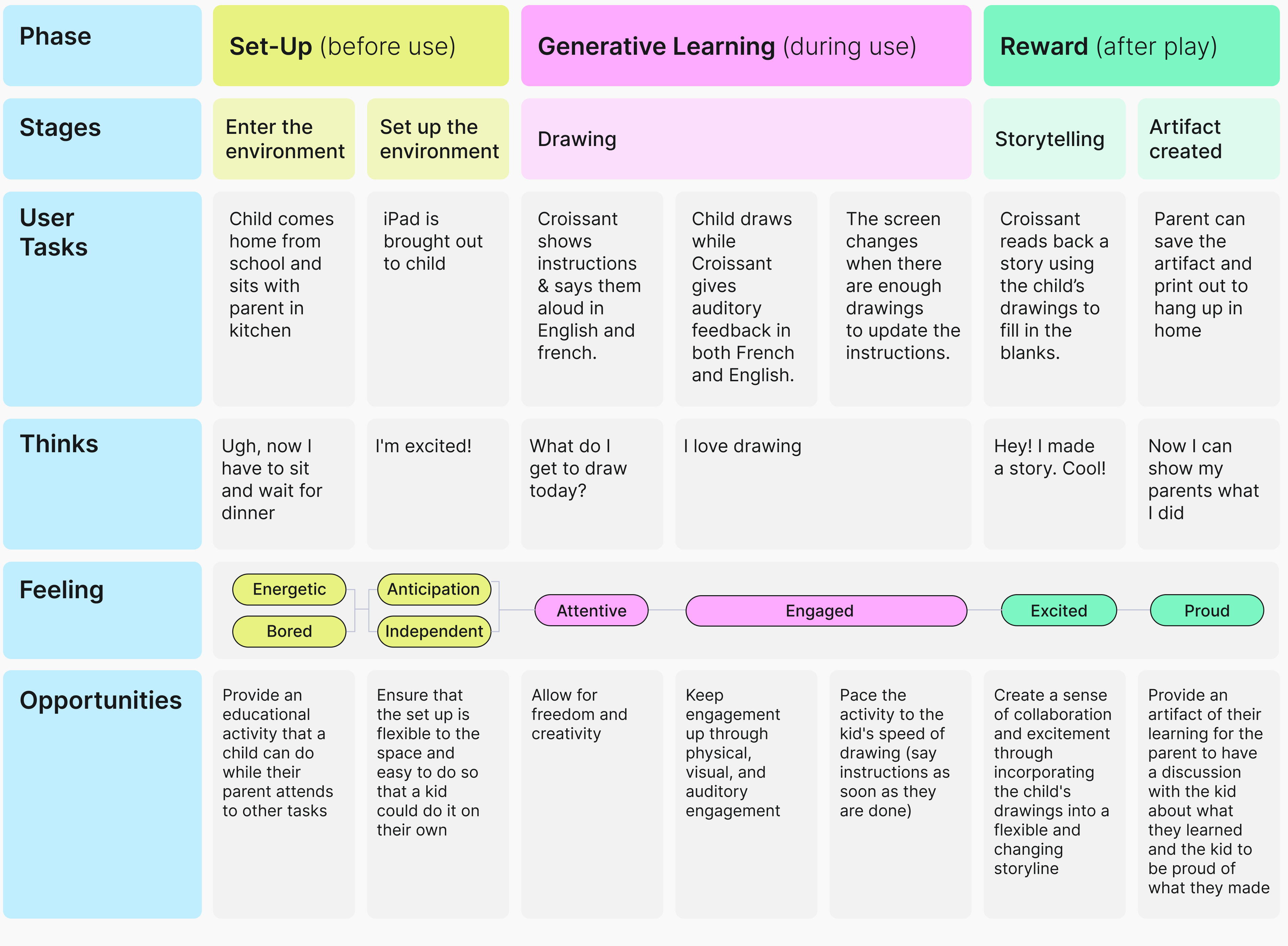 An app that teaches language through interactive story creation and encourages engagement through listening, reading and drawing. 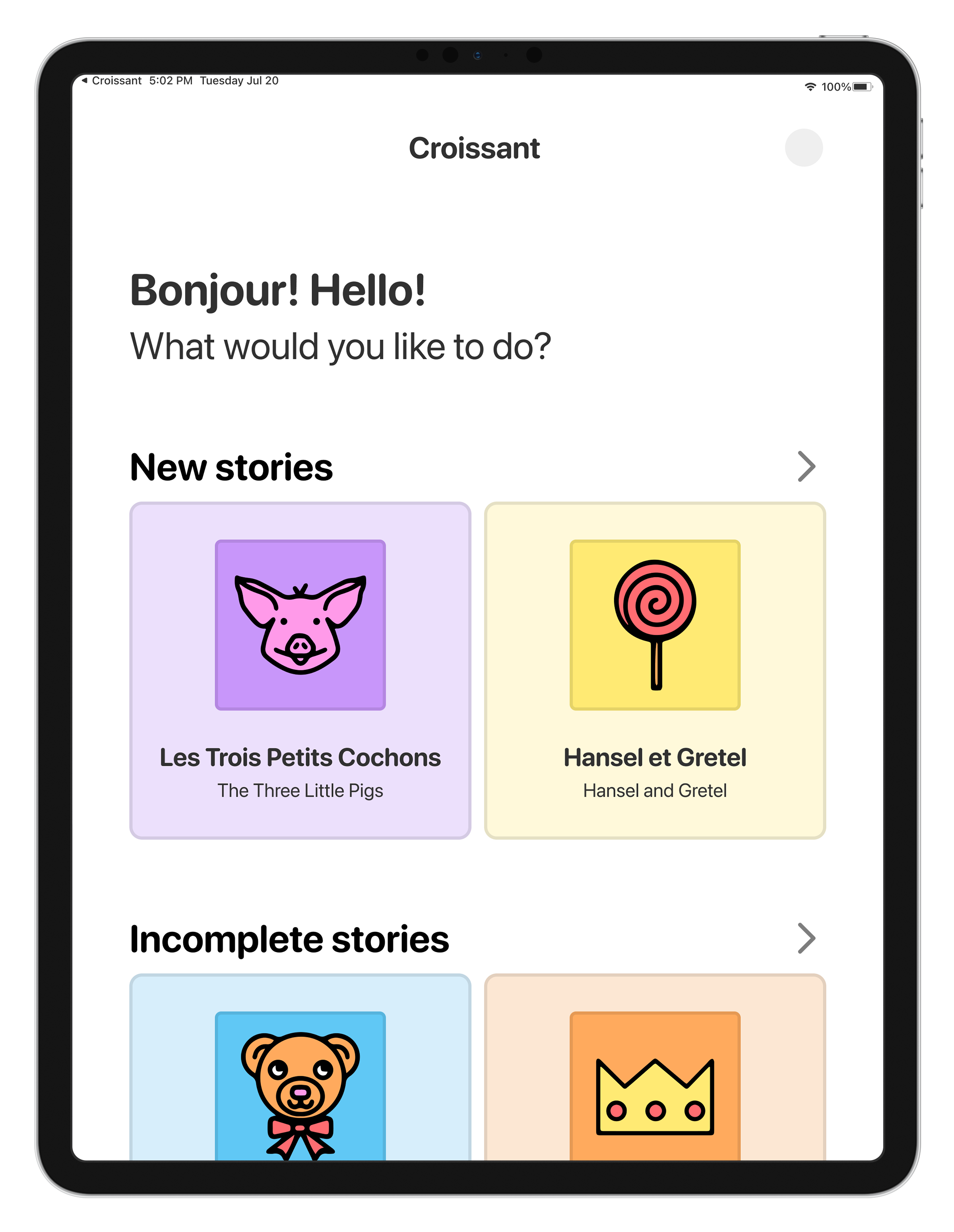 I created two flow charts to determine the innerworkings of the application.

It is simplistic enough for a child to use to start and/or continue game play. 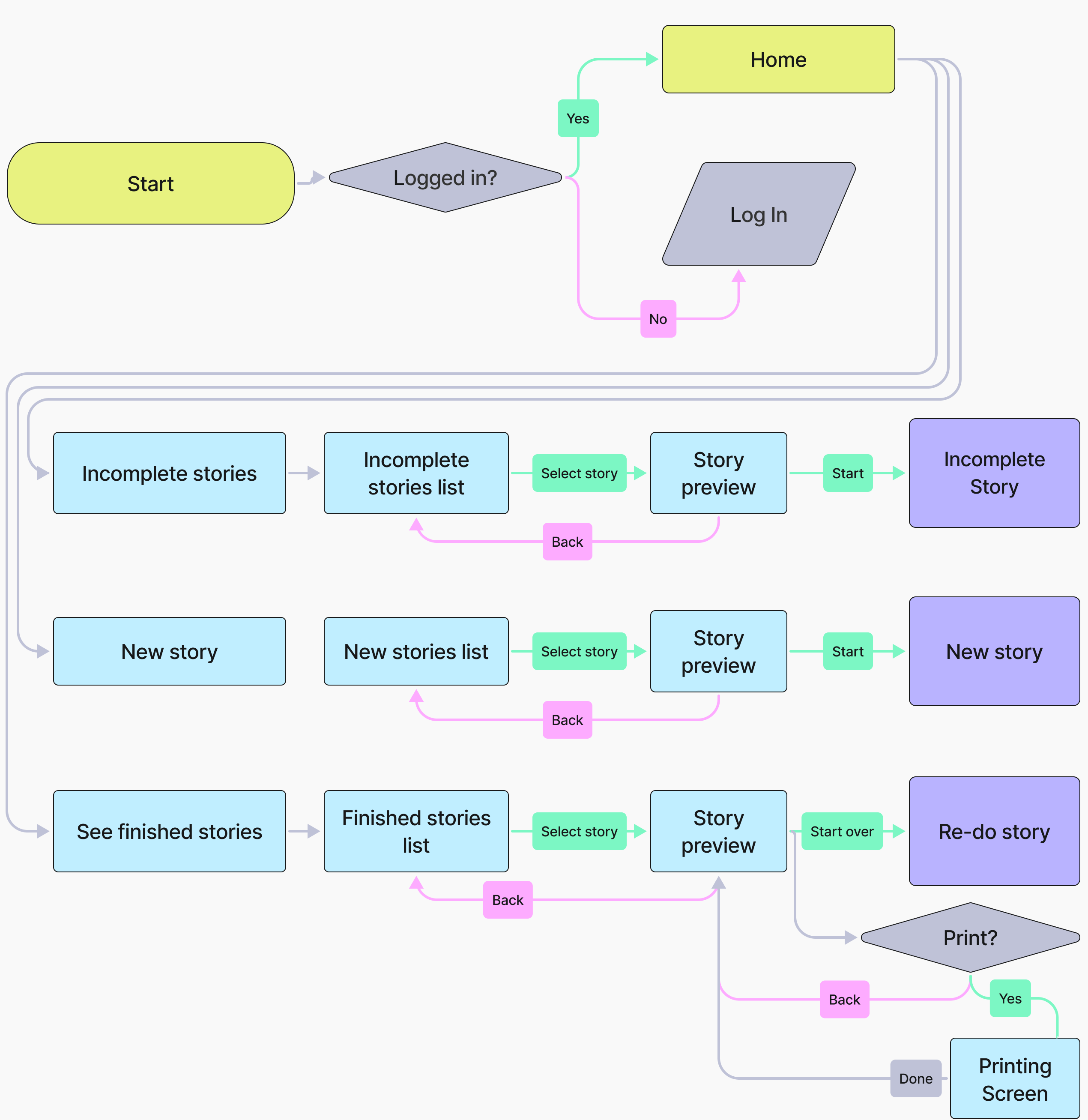 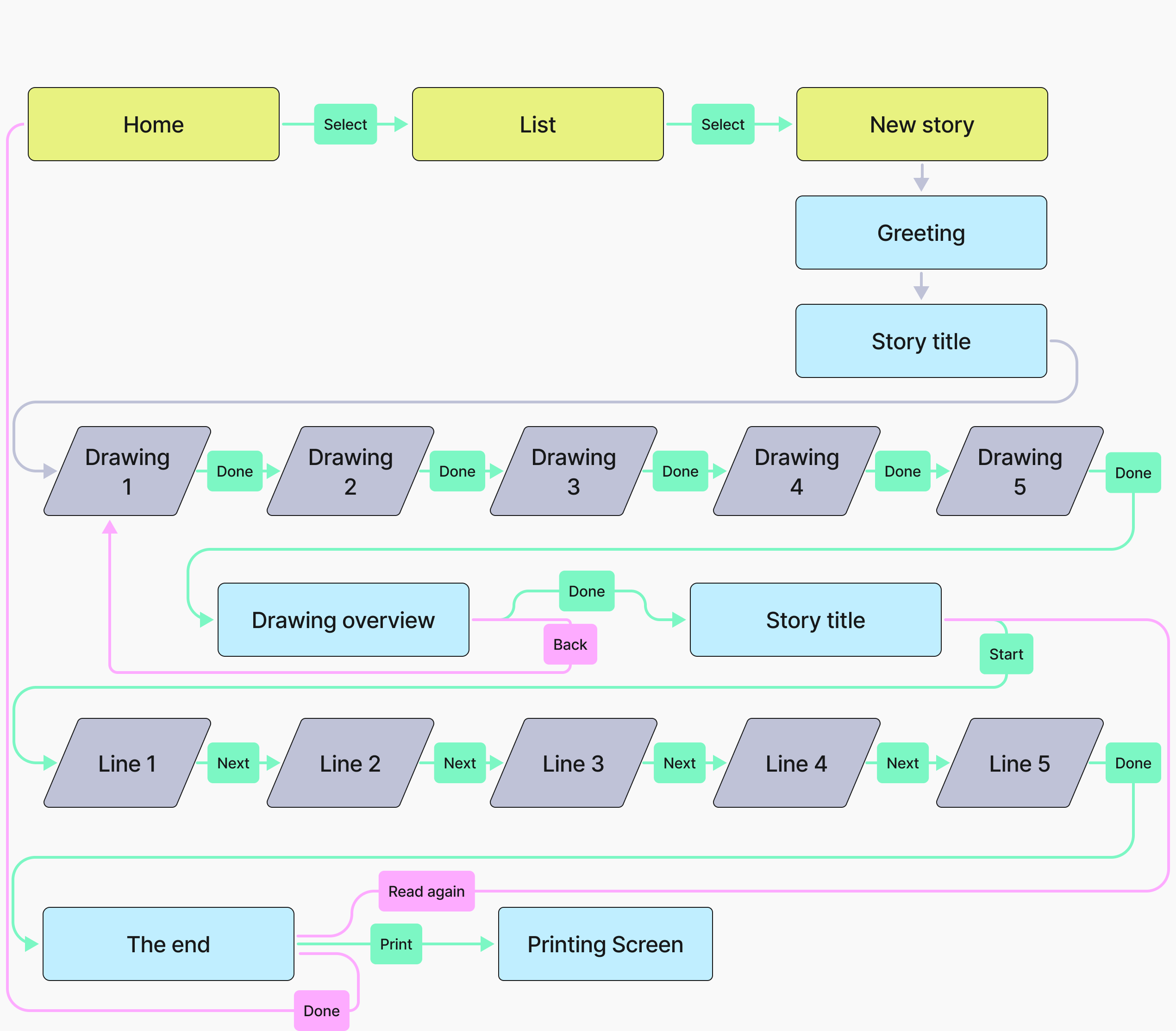 The game itself reads aloud a prompt in french, and allows the child to see the english writing as well.

The child then engages with the app by drawing an image that translates what the prompt says. At the end of the game, the app reads the story aloud in french, showing the child the images they had drawn. This engages the child in a mental and physical way, as they can recall what they drew as they hear and read the french being spoken. 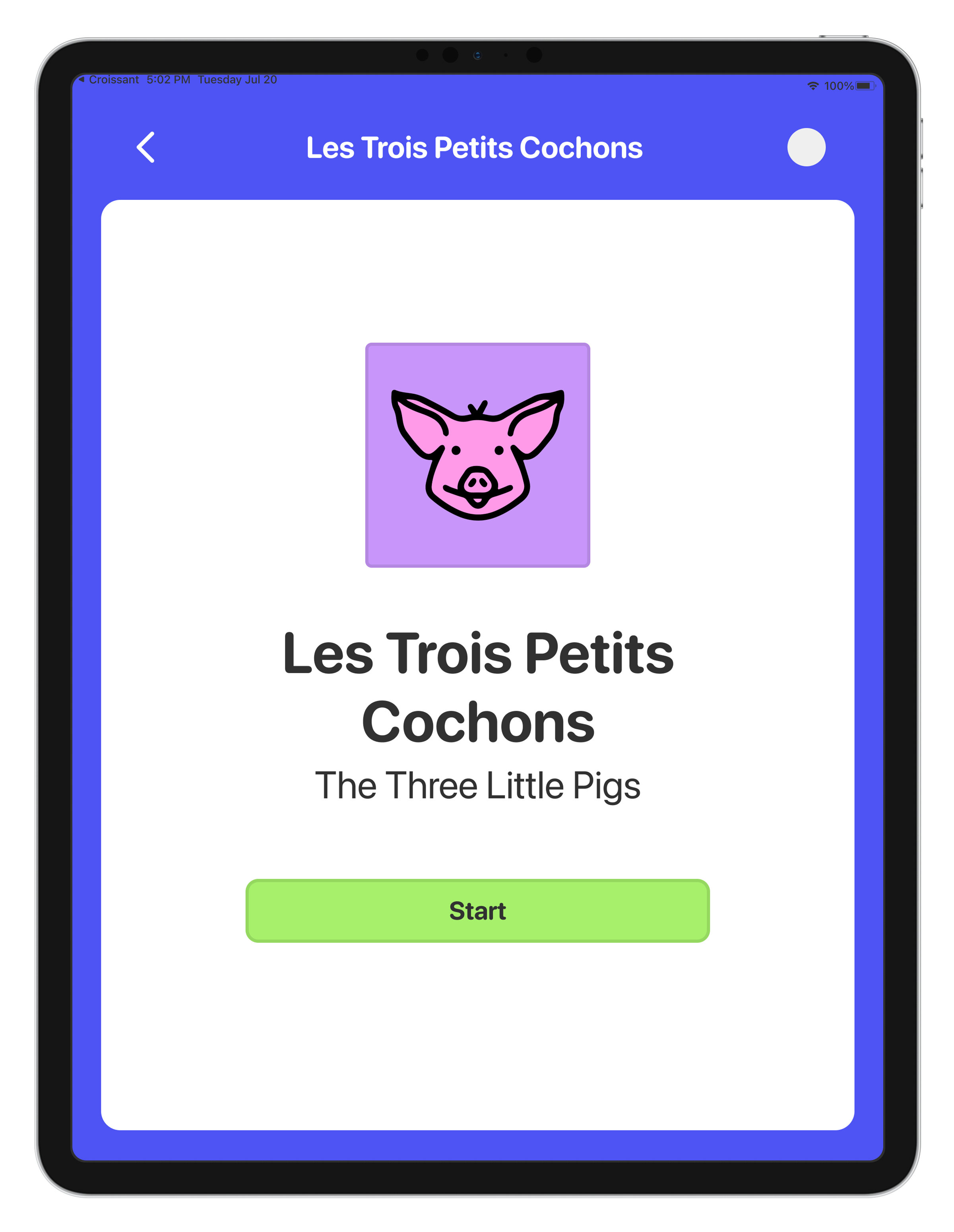 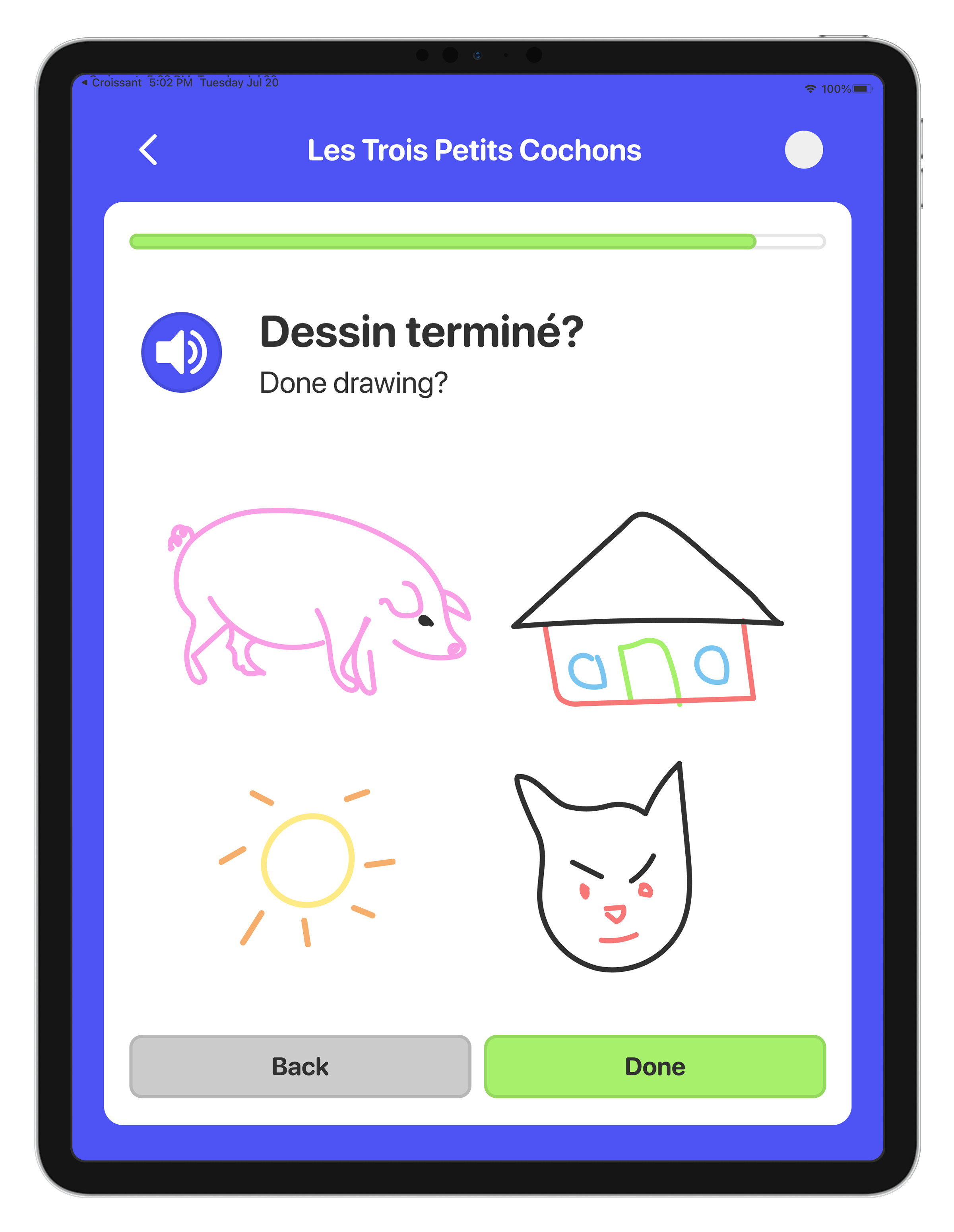 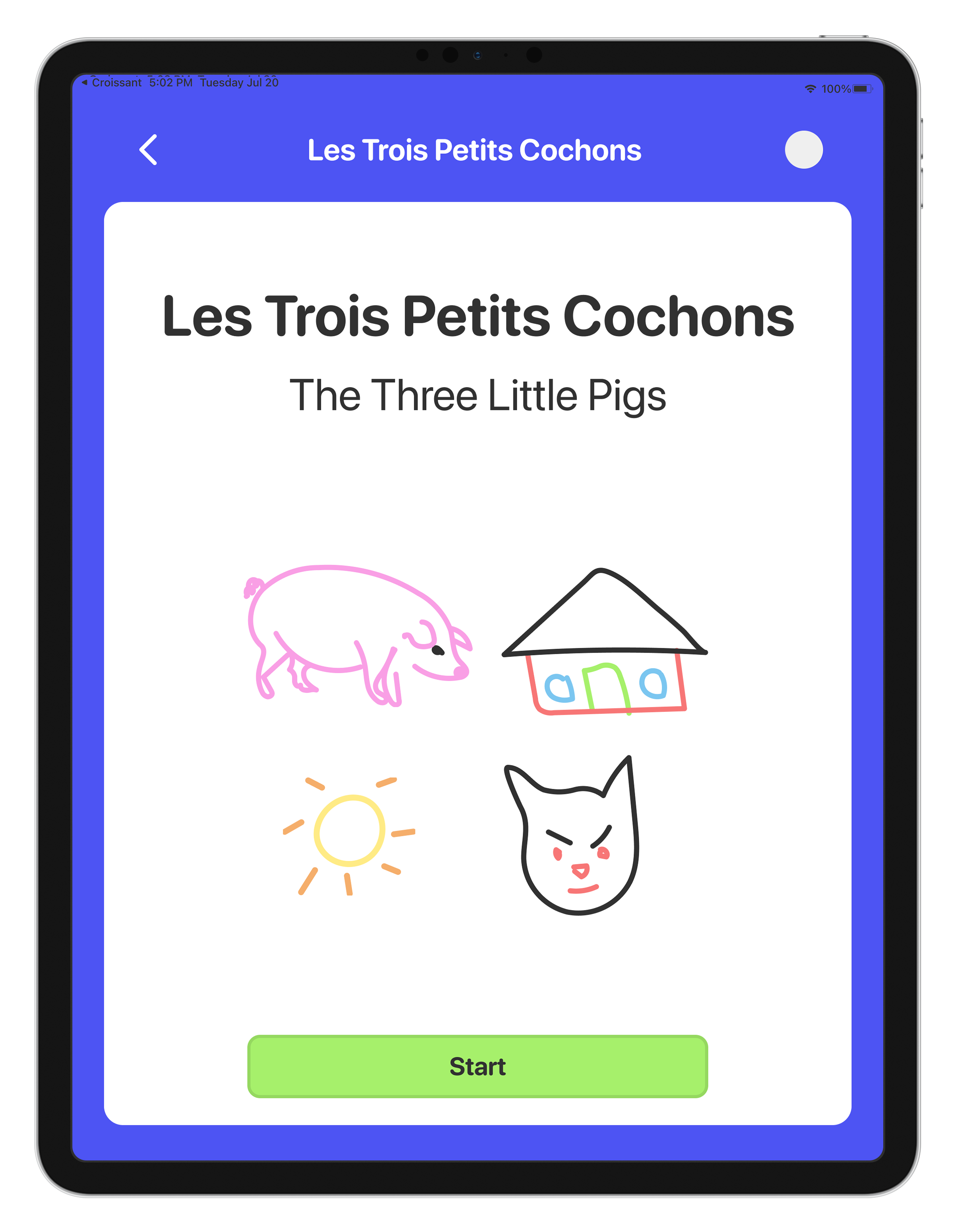 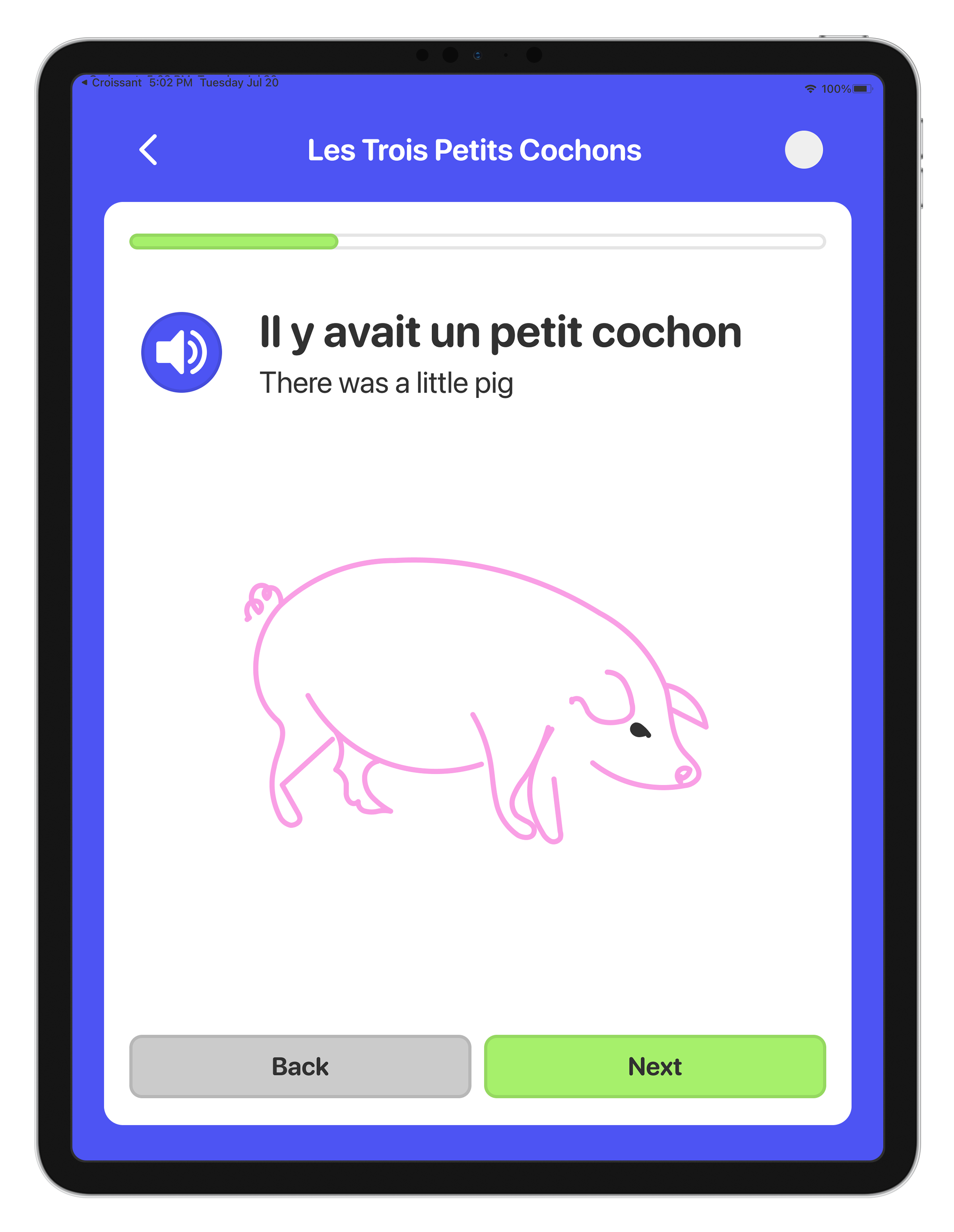 Reading the story with drawings 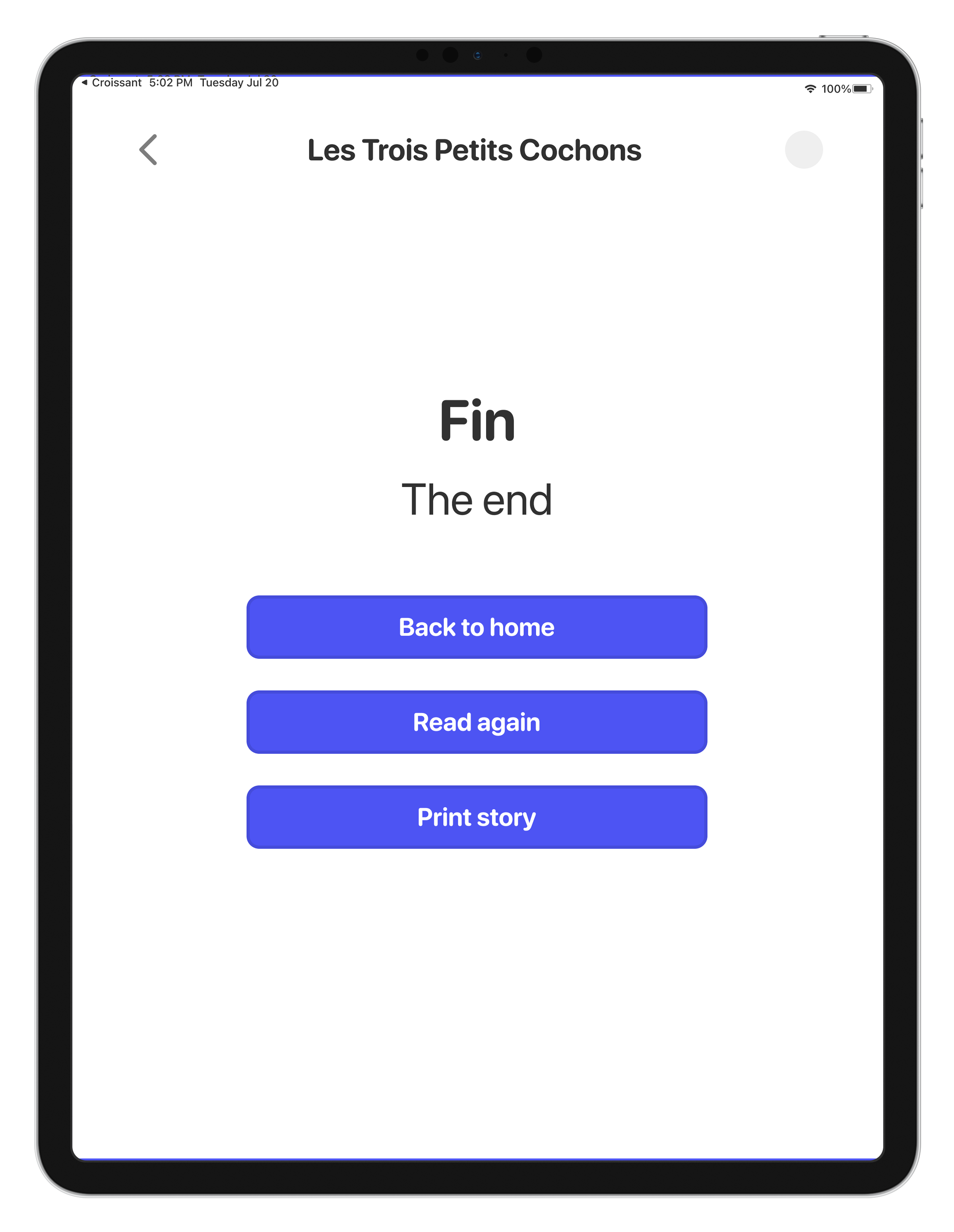 Iterating in UX is never complete, in the future I’d like to implement a speaking feature in the app to help with speech development and memorization of specific words instead of phrases